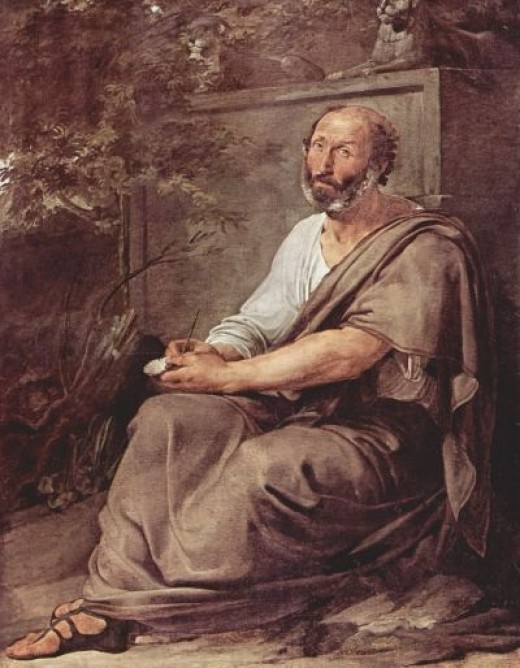 His father Nichomachus was physician to Amyntas II, King of Macedonia, father of King Philip II. In is seventeenth year Aristotle was sent to the Academy of Plato in Athens, where he remained for twenty years. After the death of Plato, Aristotle withdrew to Mysia and spent three years with Hermias, the tyrant of Atarneus, whose niece he later married. In 343-342 BC he was invited by Philip to Pella, the capital of Macedonia, to take charge of the education of Philip’s young son Alexander, who later became King Alexander III, known as the Great.

When Alexander set out upon his conquests, in 334 BC, Aristotle, then in his fiftieth year, returned to Athens and opened in the Lyceum a school of philosophy. He taught there for twelve years until, in the disturbed time following the death of Alexander, in 323 BC, a charge of impiety was brought against him, and he fled to Chalcis where he died.

Aristotle had a son named Anaximenes (of Lampsacus). He was a noted rhetorician, historian and a companion of Alexander the Great.

Aristotle was one of the great thinkers of the ancient world. Aristotle was deeply interested in the philosophy of nature, devoting much thought to the relationship between form and matter and the nature of change. Another important area of thought for Aristotle was the nature of knowledge itself. Aristotle’s ideas strongly influenced the development of thought in Western civilization, especially through the Middle Ages in the Christian nations of Europe and the Islamic world.

In addition to his philosophic contemplations, Aristotle collected a large number of observations about the physical world, particularly of living things. In fact, Aristotle may be considered the first great biologist. He examined the structure of plants and animals and observed the behavior of animals. He also classified living things in groups according to their common traits rather than their usefulness to humans.

One measure of Aristotle’s influence on the modern world is the large number of words in modern languages that can be traced back to his teaching and writings. For example, the terms of grammar, subject and predicate, come from Aristotle. Also, many words used to describe basic scientific principles are Aristotle’s. These include matter, energy, potential, cause, genus, species, and many others. Mathematics relies on such vocabulary as quantity, relation – also words of Aristotle. Many of these words have come into modern languages through Latin, rather than directly from Greek.

Aristotle was born the son of a physician who attended the king of Macedonia. At the age of about 18 he entered the great philosophers Plato’s school in Athens, the Academy. Aristotle remained at the Academy for about 20 years, then joined a group of Plato’s disciples for some 3 years afterward. In about 343 BC Aristotle went to the court of King Phillip II of Macedonia to supervise the education of Alexander, the king’s son. Aristotle thus had the opportunity to influence the future world conqueror, Alexander the Great. After Alexander reached maturity, Aristotle returned to Athens and founded the Lyceum, his own school. The method and philosophy associated with the Lyceum came to be known as peripatetic – a Greek word for walking about – because Aristotle taught while walking with his students. In 323 Aristotle fled the Athenians who had trumped up a charge against him, and settled in the city of Chalcis, where he spent his final year.
Relatively few of Aristotle’s written works survive. We know of the existence of many more because of references in the works of other writers of ancient times.

Aristotle shares with Plato the distinction of being the most famous of ancient philosophers. He opposed the Platonic doctrine of ideas, holding that an idea has no power to produce the corresponding concrete object, and that it only introduces a new complication while explaining nothing. In place of the barren concept of the idea he introduced that of form, contending that the form of a building, for instance, in the mind of the architect, is in some sense the cause of the building, having a tendency to produce a concrete reality like itself. He introduced four kinds of causes: the formal, the material, the final and the efficient. Thus in a building the formal cause would be the plan in the mind of the architect; the material cause, that of which the building is made; the final cause, the end or purpose for which the building is designed; and the efficient cause, the actual builder.

While like Plato he sought for a spiritual explanation of the universe, he held that such an explanation can be best attained by a careful investigation and comparison of actual phenomena. Hence he accumulated a vast number of facts and observations, which to a great extent laid the foundations of physical science. So far as his method was experimental and inductive, he was in accord with the methods of modern science. On the other hand, Aristotle was the founder of the deductive science of logic and also its perfecter. Throughout the Middle Ages Aristotle was the one great authority. in the theological as well as the lay world, on science and philosophy.

He assumed the possibility of establishing an ideal scheme of development that could harmonize all human experience. While Aristotle was greatly influenced by his master Plato, and accepted the doctrine of an intelligent, self-active first cause, he differed by rejecting Plato’s expression “self-moved” and substituted for it “unmoved-mover”. In this way he attempted to describe an active principle, independent of the limitations of space, time and matter, which would explain the world of nature and man.

Some of the principal aspects of the philosophy of Aristotle are:

The Works of Aristotle

Among Aristotle’s many works are his books on logic, called Organon or Instrument, because they provide no positive knowledge, but instead provide the means by which it is to be attained. His works on material science include the Physics, which gives a vast amount of information on astronomy, meteorology, plants and animals. His writings on the nature, scope and properties of being received the name of Metaphysics (as it followed Physics), Aristotle entitling it First Philosophy. His treatment of the divine spirit or first cause as pure intellect, perfect in unity, immutable and as he said, “the thought of thought”, is given in the Metaphysics. To his son Nichomachus he dedicated his work on Ethics, hence called the Nicomachean Ethics. His Rhetoric, his incomplete work on Poetics, and his incomplete work on Politics are also of importance.

In 1891 a genuine work by Aristotle on the Constitution of Athens was discovered at the British Museum in London, in a heap of papyrus rolls. Historians have found this work of great value in reconstructing many phases of the history of Athens.

In the Metaphysics, Aristotle shows that there is a distinct branch of philosophy – theology, or first philosophy, as he calls it – which has for its object everything which exists, being qua being; in other words , it investigates what it is for a thing to be or to exist or to be a thing. It is therefore, the most universal kind of enquiry, since everything, in so far as it is a thing, has being or existence; and it is the most ultimate kind of enquiry, since the fact that it exists is the most ultimate fact about anything. The Nicomachean Ethics and Politics treat of the principles governing man’s social and private conduct; the Rhetoric investigates the modes of persuasive argument, and the Poetics studies the nature of literary tragedy. Aristotle also wrote several scientific works showing considerable powers of scientific observation, eg: On the Parts of Animals, The History of Animals and The Generation of Animals. In all spheres, Aristotle’s philosophy has been one of the most important influences on Western thought.