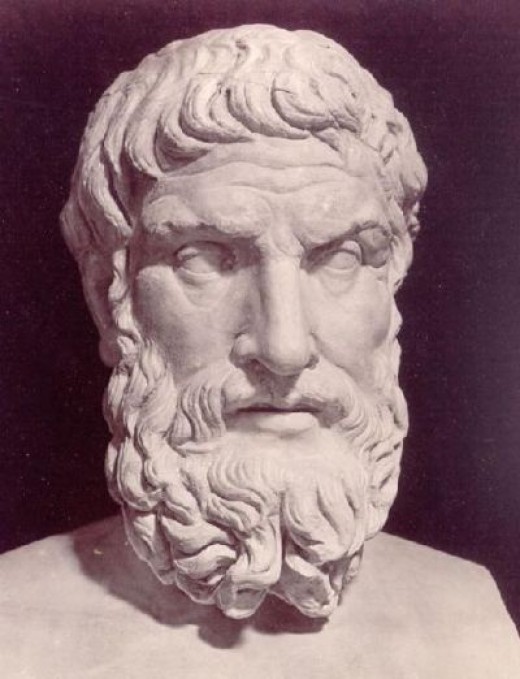 In 306 BC Epicurus founded a philosophical school in Athens. Because his followers met in a garden of his home they became known as “philosophers of the garden”. Epicurus adopted the atomistic physics of Democritus but made several important changes. In place of the random motion of the atoms in all directions, he assumed, for simplicity of explanation, that a uniform motion downward occurred.He also allowed an element of chance in the physical world by assuming that the atoms sometimes swerve in unpredictable ways, thus providing a physical basis for a belief in free will.

Epicurus declared all scientific knowledge, not connected with the conduct of life, to be useless. According to him, sense-knowledge is the fundamental basis of all knowledge. Thus the feeling of pleasure is the criterion of what is morally good, and pain of what is morally bad. Epicurus denied the existence of the gods and applied the atomistic theory of Democritus to the soul to show that it was simply a material thing.

He maintained that natural science is important only in so far as it can be applied in making practical decisions and in allaying fear of the gods or of death. The aim of human life is to achieve the maximum amount of pleasure, which he identified with gentle motion and the absence of pain.

Man’s ultimate happiness, he held, consists in pleasure, but one must calculate what gives the most pleasure in the long run. This theory is sometimes called Hedonism.

The teachings of Epicurus are preserved mainly in the philosophical poem On the Nature of Things by the Roman poet Lucretius. Lucretius contributed greatly to the popularity of Epicureanism in Rome.

A system of philosophy based chiefly on the teachings of the Greek philosopher Epicurus.

The essential doctrine of Epicureanism is that pleasure is the supreme good and main goal of life. Intellectual pleasures are preferred to sensual ones, which tend to disturb peace of mind. True happiness, Epicurus taught, is the serenity resulting from the conquest of fear of the gods, of death and of the afterlife. The ultimate aim of all Epicurean speculation about nature is to rid men of such fears.

Epicurean physics is atomistic, in the tradition of the Greek philosophers Leucippus and Democritus. Epicurus regarded the universe as infinite and eternal and as consisting only of bodies and space. Of the bodies, some are compound and some are atoms or indivisible, stable elements of which the compounds are formed. The world as it is seen by man is produced by the whirlings, collisions, and aggregations of these atoms, which individually possess only the attributes of shape, size and weight.

In biology, Epicurus anticipated the modern doctrine of natural selection. He postulated that natural forces give rise to organisms of different types and that only the types able to support and propagate themselves have survived.

Epicurean philosophy is thoroughly materialistic. It holds that sensations are caused by a continuous stream of films or “idols”: cast off by bodies and impinging on the senses. All sensations are believed to be absolutely reliable; error arises only when sensation is improperly interpreted. The soul us regarded as being composed of fine particles distributed throughout the body. The dissolution of the body in death leads, Epicurus taught, to the dissolution of the soul, which cannot exist apart from the body. There is accordingly no afterlife. Since death means total extinction, it has no meaning either to the living or to the dead, for “when we are, death is not; and when death is, we are not”.

The cardinal virtues in the Epicurean system if ethics are justice, honesty, and prudence, or the balancing of pleasure and pain. Epicurus preferred friendship over love, as being less disquieting. His personal hedonism taught that only through self-restraint, moderation and detachment can one achieve the kind of tranquility that is true happiness. Despite his materialism, Epicurus believed in the freedom of the will. He suggested that even the atoms are free and move on occasion quite spontaneously his view resembles the uncertainty principle of quantum mechanics.

Epicurus did not deny that there were gods, but he emphatically maintained that as “happy and imperishable beings” of supernatural power they could have nothing to do with human affairs, although they might take pleasure in contemplating the lives of good men. True religion lies in a similar contemplation on man’s part of the ideal lives of the high, invisible gods.

So firmly fixed and venerated were Epicurus’ teachings that the doctrines of Epicureanism, unlike those of its great philosophical rival Stoicism, remained remarkably invariant throughout its history as a living tradition. Epicureanism was brought into discredit largely because of a confusion, which still persists, between its tenets and the crudely sensual hedonism advanced by the Cyrenaics. Nevertheless the Epicurean philosophy found many distinguished disciples, including, among the Greeks, the grammarian Apollodorus and among the Romans, the poet Horace, the statesman Pliny the Younger, and most notably, the poet Lucretius is the main source of our knowledge of Epicureanism. As an organized school Epicureanism went out of existence early int he 4th century AD. It was revived in the 17th century by the French philosopher Pierre Gassendi. Since then, many eminent persons have accepted its principles. Epicureanism has attracted people of all ages and is still widely regarded as one of the leading schools of moral philosophy of all time.