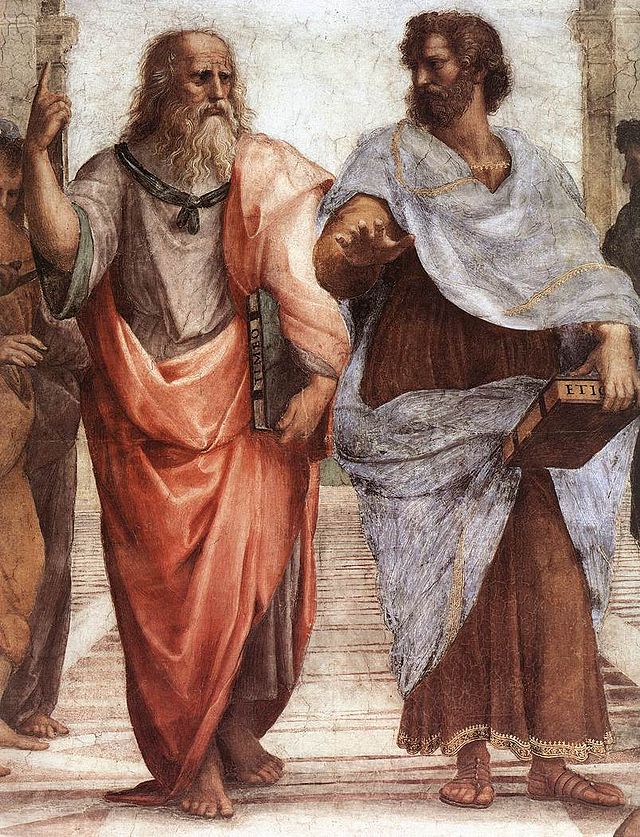 One of the great Greek philosophers, Plato (427 – 347 BC) produced ideas which laid groundwork for much of subsequent Western philosophy.

Plato was born into an important Athenian family. He was well educated and at the age of 20 became a pupil of Socrates. The teachings of Socrates had an enormous influence on Plato’s thinking and on what he wrote.

When Socrates was put to death in 399 BC, Plato went to live for a time in Megara, west of Athens. He also traveled for the next 12 years throughout Greece and to Egypt, Italy and Sicily. In 387 BC he returned to Athens and started a school of philosophy. Most schools were held in the open air, in shady walks or under the colonnaded verandas of public buildings. His school was established in a park and gymnasium about 2 km outside the city walls.

This park was sacred to Academus, and so Plato’s school became known as the Academy. The Academy of Plato lasted until 529.

Plato believed, like Socrates. that the right way to teach was to ask questions and then let the pupils discover the truth for themselves. A great deal of this teaching was published in his Dialogues. which were discussions between various people. Probably Plato’s most famous work was The Republic, in which he discusses the ideal state or society. Plato describes the last hours and thoughts of Socrates in a book called Phaedon.

His most famous student was Aristotle, who invented the basis of the philosophy of logic.

Plato said, “Until philosophers are kings, or the kings and princes of this world have the spirit and power of philosophy … cities will never cease from ill, not the human race.”

His ideal republic was governed by such philosopher-princes, whom he called guardians. They did not achieve their rank due to birth, but as a result of natural ability. All children went to school until they were 20, when they were given moral, physical and mental tests to weed out the less fit.
Those who failed these tests became businessmen, workingmen and farmers – capitalists who were allowed to own property and possess money. The ones who passed the tests went on to 10 more years of education, followed by another weeding-out process. The people who failed at this time became soldiers, who lived communistically. The others – the future guardians – studied divine philosophy for five years, at the end of which they went into the world to lead practical lives until, at age 50, they entered the ruling class, with power their only possession. They were not allowed to own property or possess money, and wives and children were held in common.

The 5,040 citizens of the Republic (the number that could be addressed by a single orator) supplied 360 guardians selected by special tests; each month 30 of the guardians ruled.

Marriage was governed by genetic considerations. The best married the best, the inferior the inferior. Only superior children were allowed to live; the others were killed at birth. Survivors were put in a rearing pen and brought up as a group.

The Republic was not a free society. The state controlled the arts, education, and religion. People led lives without luxury, since to Plato luxury represented trouble. His credo was “A place for every man, and every man in his place.”

Philosophy was originally applied to all knowledge of the causes of things. Plato and Aristotle gave the word a more specific meaning, and especially since the 16th Century, it is usually taken to refer to a kind of investigation distinct in object and method from the physical or empirical sciences on the one hand, and from the knowledge available from religious “faith” and “revelation”, and theology on the other.

It seems that only in the “Western” tradition of philosophy that philosophy has been disengaged from both empirical science and religion.
Plato’s theory of knowledge also is implicit in his theory of ideas. Plato stated that both the material objects perceived and the men perceiving them as constantly changing; but, since knowledge must be concerned only with unchangeable and universal objects, knowledge and perception are fundamentally different.
In place of Plato’s doctrine of ideas with a separate and eternal existence of their own, Aristotle proposed a group of so-called univerals that represent the common properties of any group of real objects. The universals, unlike Plato’s ideas, have no existence outside of the objects they describe. Closer to Plato’s thought was Aristotle’s definition of “form” as a distinguishing property of objects, but with an independent existence apart from the objects in which it is found. Describing the universe, Aristotle stated that it consists in matter of the four elements, fire, air, earth and water, plus a fifth element that exists everywhere and is the sole constituent of the heavenly bodies “above” the moon.

Seeing the insufficiency of the Platonic doctrine; of the Forms as an explanation of change or becoming, Aristotle proposed his celebrated distinction between “potential being” and “actual being” to solve the Parmenidean dilemma. Thus, in his work the Physics, he notes that change involves the passage of a thing not from a state of not-being to a state of being, but from a state of potentially being something to actually being that thing, eg: water only becomes actually hot because it can be hot, or is potentially hot. This distinction, applied to the things in the world, gives rise to the theory of “matter and form”. For anything to exist it must exist as a determinate thing but, at the same time as it exists as this determinate kind of thing, it can potentially be another kind of thing, eg: water is cold, but it can be hot. This principle of indeterminacy, a capacity for taking on new determinations, Aristotle calls matter; the principle of determinacy, that which makes a thing to be actually what is is, he calls form. Thus, knowledge of man comprises knowledge of the form apart from the individual subjects in which, in real existence outside the mind, the “form” exists.

In his metaphysical theory, Aristotle criticized Plato’s separation of form from matter and maintained that the forms, or essences, are contained within the concrete objects that exemplify them. Everything real, for Aristotle, is a combination of potentiality and actuality; in other words, everything is a combination of that which a thing may be, but is not yet, and that which it already is, because of all things change and become other than they were, except man’s and God’s active intellects, which are pure forms.

Nature, for Aristotle, is an organic system of things whose common forms enable us to arrange them into classes comprising species and genera, each species having a form, purpose, and mode of development in terms of which it can be defined. The aim of theoretical science is to define the essential forms, purposes and modes of development of all species and to arrange them in their natural order in accordance with the complexities of form, the main levels being the inanimate, the vegetative, the animal and the rational. The soul, for Aristotle, is the form or actuality of the body, and man, whose rational soul is a higher form than the souls of other terrestrial species, is the highest species of perishable things. The heavenly bodies, composed of an imperishable substance, or ether, and moved eternally in perfect circular motion by God, are still higher in the order of nature. This hierarchical classification of nature was adopted by many Christian, Jewish and Muslim theologians in the Middle Ages as a view of nature consistent with their religious beliefs.

Six Great Dialogues: Apology, Crito, Phaedo, Phaedrus, Symposium, The Republic – still one of the best translations out there.