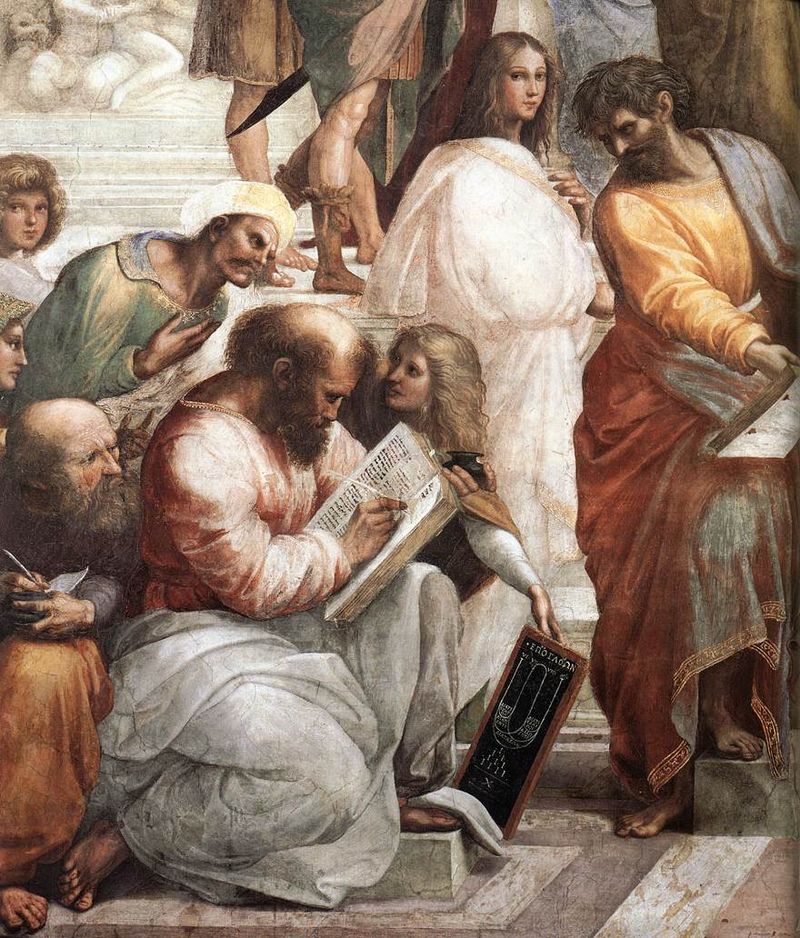 Pythagoras was a Greek philosopher and mathematician. He was famous for formulating the Pythagorean Theorem, but its principles were known earlier. As a philosopher, Pythagoras taught that number was the essence of all things. He mystically associated numbers with virtues, colors and many other ideas.
He also taught that the human soul is immortal and that after death it moves into a another living body, sometimes that of an animal. This idea, called transmigration of the soul or reincarnation, appears in many early religions. It is still the belief of many Hindu’s of India. It is uncertain whether Pythagoras obtained some of his ideas during travels in the East.

Pythagoras believed that the earth was spherical and that the sun, moon and planets have movements of their own. His successors developed the idea that the earth revolved about a central fire. This belief anticipated the Copernican theory of the universe.

Little is known of Pythagoras’ early life, but scholars believe that he was born on the island of Samos.

In about 529 BC, he settled in Crotona, Italy, and founded a school (brotherhood) among the aristocrats of that city. There are stories that the people were suspicious of the Pythagorean brotherhood because its members were aristocrats, and killed most of them in a political uprising. Historians do not know whether Pythagoras left the city some time before the outbreak of violence and escaped death there, or was killed in it. The brotherhood of aristocrats was finally destroyed in the 400’s.

Pythagoras and mathematics as a part of philosophy and religionThe study of mathematics was looked on as a valuable training for the soul. Since all things in the world can be numbered, and the relations between things expressed numerically. eg: the intervals on the musical scale. They identified science with mathematics, maintaining that all things are made up of numbers and geometrical figures.

The Pythagoreans, having discovered the mathematical laws of musical pitch, inferred that planetary motions produced a “music of spheres”. and developed a “therapy through music” to bring man in harmony with the celestial spheres. They made important contributions to mathematics, music theory and astronomy.
Among the extensive mathematical investigations carried on by the Pythagoreans were their studies of odd and even numbers, and of prime and square numbers. From this arithmetical standpoint they cultivated the concept of number, which became for them the ultimate principle of all proportion, order, and harmony in the universe. Through such studies they established a scientific foundation of mathematics. In geometry the great discovery of the school was the hypotenuse theorem or Pythagorean theorem, which states that the square on the hypotenuse of a right triangle is equal to the sum of the squares on the other two sides; “Pythagorean numbers” are numbers so related, for instance, 5, 4 and 3.

The Pythagorean School of Greek Philosophy

Or should we say ‘Latin Philosophy?

‘Religious and philosophical school founded in southern Italy at Croton in around 530 BC by the Greek philosopher and mathematician Pythagoras. It was a school of philosophy that was more religious and mystical than the Ionian school. Influenced by the teachings of the Orphic religious sect, but also with a strong scientific spirit.

Pythagoreanism fused the ancient mythological view of the world with the developing interest in scientific explanation. The system of philosophy that became known as Pythagoreanism combined ethical, supernatural and mathematical beliefs into a spiritualistic view of life.

Although the original purpose of the brotherhood was religious rather than political, the society became involved in the fierce struggles between the aristocracy and the democracy that were raging in southern Italy, when the democratic party gained the upper hand, it turned on the Pythagorean brothers in fury and burned them in their meeting places. The Pythagoreans may have remained powerful in Italy until the middle of the 5th century BC, when their order was violently stamped out.

However Porphyry reports beliefs that we would call ‘Pythagorean’ in the 3rd Century C.E. “All animate nature (including some plants) were kin; they possessed souls that reincarnated; therefore, destroying them was tantamount to endoanthropophagy.” (That is: it was felt to be as reprehensible as eating human flesh from someone from your own tribe: tabu.)

[The quote is from Imagining Karma: Ethical Transformation in Amerindian, Buddhist, and Greek Rebirth]

The Pythagoreans adhered to certain mysteries, which were perhaps similar in many respects to the Orphic mysteries. Silence, abstinence from food, simplicity in dress and “external goods” and the habit of frequent self-examination were prescribed.

It’s unclear whether the ‘silence’ prescribed referred to silence – as in no talking – or silence about the teachings to outsiders. It is clear that there were teachings being kept only to the initiates who were not allowed to share them with outsiders.

Theories on numbers applied to reality

The astronomy of the Pythagoreans marked an important advance in ancient scientific thought, for they were the first to consider the earth as a globe revolving with the other planets, including the sun, around a central fire.

They explained the harmonious arrangement of things as that of bodies in a single all-inclusive sphere of reality, moving according to a numerical scheme. Because the Pythagorean thought that the heavenly bodies were separated from each other by intervals corresponding to the harmonic lengths of strings, they held that the movement of the spheres gave rise to a musical sound, which they called the “harmony of the spheres”.

The speculations of the Pythagorean may be regarded variously. Their formal principle of number as the basis of all things is often said to mark the transition from the crude hylozoism of Thales and other Ionian philosophers to a formal or rational or conceptual contemplation of the world, which was developed by the Eleatics and culminated in the philosophy of Plato.

The belief of the Pythagoreans in a quantitative combination of elementary units became a commonplace of Greek speculative cosmology, constituting the ground for a deductive ontology. Their conception of a measure of proportion in things was a pronounced trait of Greek philosophy.

Soul and Reincarnation in Pythagoras’ Philosophy

The Pythagoreans taught and practiced a way of life based on the belief that the soul is a prisoner of the body, is released from it at death, and is reincarnated in a higher or lower form of life, depending on the degree of virtue achieved. The highest purpose of man should be to purify his soul by cultivating intellectual values, to refrain from sensual pleasures, and to practice various religious rituals.

Recommended reading: The Pythagorean Sourcebook and Library: An Anthology of Ancient Writings Which Relate to Pythagoras and Pythagorean Philosophy