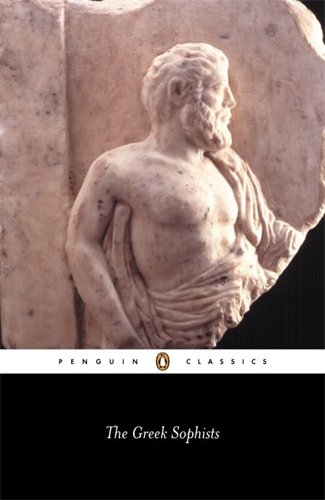 In philosophy “Sophists” is applied mainly to the traveling Greek teachers in the 5th century BC who wandered the country. They offered lessons in logic, ethics and rhetoric for a fee. Later they acquired a bad reputation, for their tendency to teach debating tricks rather than what was true. This gave rise to the word ‘sophistry’ (deceptive or fallacious argument).

Sophist is derived from the Greek word sophos, meaning wisdom.

The Sophists were Greek philosophers who were part of the transition from the older and ruder cosmic philosophers to the more refined systems that began with Socrates, Plato, and Aristotle.

The more refined systems were founded primarily on the study of the human mind as the perceiving, thinking, reasoning, and knowing subject.
In the older systems the direct relation of mind to the objective universe did not receive prominent attention. The hypothesis of a unity in the diverse world outside the mind was assumed without dispute and a theistic or materialistic interpretation of this unity formulated according to the tendency of the school.
Thus there had arisen a succession of systems that were agreed in being artificial cosmogonies, and were unrelated if not hostile to the current traditions of religion. However, these systems were unable to stand the inevitable criticism of comparison with fact. The Sophists were the exponents of this type of comparison and criticism, and their force fell both on philosophy and religion. But the Sophists were not great men, at least in comparison with those who succeeded them, and they appeared in an age of political decline and social corruption.

The direct services of the Sophists to philosophy appear to have been small and negative. It is too much to attribute to them the introduction of subjective philosophy. This, as its simultaneous appearance in different schools proves, was no more than a necessity of the period to which they belonged. What chiefly marked the Sophists was their incapacity to generalize the subjective element, in consequence of which they were not properly philosophers but only the critics of a dying philosophy.

The Sophists rendered to science and literature greater services than they were able to render to philosophy. They have been aptly compared to the French encyclopedists. They belonged to all the liberal professions and taught all the usual branches of knowledge. Some of them were distinguished as rhetoricians and grammarians, others as men of science. They frequently made claims to universal knowledge.

Because of their overweening estimate of the newly found subjective element of knowledge, they carried this pretension so far as to profess to speak of subjects of which they knew nothing, though all their pretensions were not equally frivolous. Rhetoric, to which they naturally gave undue importance, was systematically studied by them, and they supplied some of the earliest models of good Greek prose. The Sophists, particularly the later ones, were accused of being superficial in their attainments, and mercenary, vainglorious, and self-seeking in their aims.

Protagoras of Abdera, the earliest and one of the most important of the Sophists, was a contemporary of Socrates but considerably older. He applied the Heraclitean doctrine of the universal flux of all things to the mind and maintained the uncertainty of the existence of the gods and the relativity of all truth. Man, he said, is the measure of all things. That is also true for the individual man who perceives or feels. Sense and the gratification of sense are the only relations that subsist between man and the external world. All opinions are equally true, and contradictories may be affirmed with equal authority.

Gorgias of Leontini went to Athens in 427 B.C. as an ambassador from his native city. He sought to excel in splendid rhetoric. Building upon Zeno’s thought, he took a bolder stand in skepticism than Protagoras. His book was called On Nature or the Non-Existent. His three cardinal propositions were that nothing exists, that if anything exists it cannot be known, and that if it could be known it could not be communicated.

Gorgias reaches these conclusions by a logical quibble, in which he plays off Heraclitus against the Eleatics. The skepticism of Gorgias, however, like that of other Sophists, was neither very profound nor very consistently developed, since it was founded upon superficial logic. His successors applied it chiefly in a moral direction, which made Plato call the alt of rhetoric as taught by Gorgias a corruption of justice.

Hippias of Elis represented the law as a tyrant in compelling men to act contrary to nature. Thrasymachus made the gratification of desire the natural right of the stronger, and might the law of nature. Critias, one of the 30 tyrants, ascribed faith in the gods to the invention of politicians. Prodicus of Ceos taught a morality more in accordance with ordinary conceptions of right. Some of his moral discourses are preserved and are still admired for the feeling they display. His teaching was recommended by Socrates, and he has sometimes been called his predecessor. However, Prodicus is said to have been exorbitant in his charges for instruction.

It was he who taught rhetoric to Euripides.