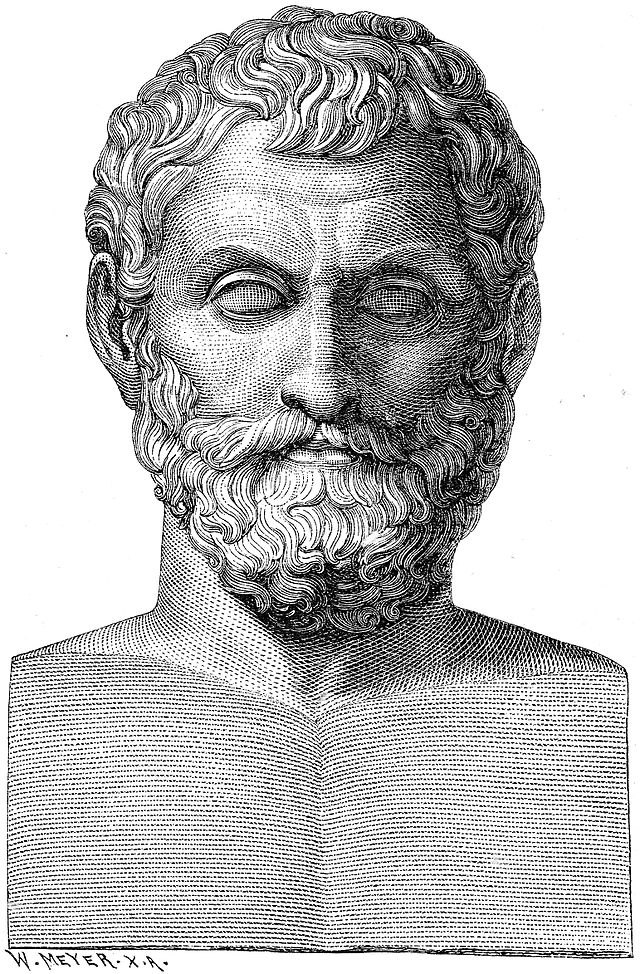 Greek philosophy may be divided between those men who sought an explanation of the world in physical terms and those who stressed the importance of nonmaterial forms or ideas. The first important school of Greek philosophy, the Ionian or Milesian, was largely materialistic. Founded by Thales of Miletus on the Ionian coast of Asia Minor in the 6th century BC, it began with Thales’ belief that water is the basic substance out of which all matter is created. Thales who was revered by later generations as one of the Seven Wise Men of Greece.

Thales was interested in astronomical, physical and meteorological phenomena, and his scientific investigations led him to speculate that all natural phenomena are different forms of one fundamental substance, which he believed to be water, because he thought that evaporation and condensation were universal process.
A more elaborate view was offered by Anaximander, who held that the raw material of all matter is an eternal substance that changes into the forms of matter known to men. These forms in turn change and merge into one another according to the so-called rule of justice, that is, balance and proportion.

Anaximander, was a disciple of Thales, and he maintained that the first principle from which all things evolve is an intangible, invisible, infinite substance that he called “the boundless”. He realized that no observable substance could be found in all things.This substance, he maintained, is eternal and indestructible. Out of its ceaseless motion the more familiar substances, such as warmth, cold, earth, air and fire, continuously evolve, generating in turn the various objects and organisms that make up the recognizable world.

The third great Ionian philosopher, Anaximenes, returned to Thales’ assumption that the primary substance is something familiar and material, but he claimed it to be air rather than water. He believed that the changes things undergo could be explained in terms of rarefaction and condensation of air. Thus Anaximenes was the first philosopher to explain qualitative differences in terms of quantitative differences, a method fundamental to physical science.

In general, the Ionian school made the initial radical step from mythological to scientific explanation of natural phenomena; it discovered the important scientific principles of the permanence of substance, the natural evolution of the world, and the reduction of quality to quantity.