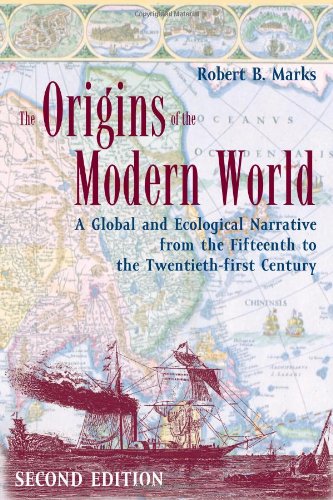 The Origins of the Modern World: A Global and Ecological Narrative from the Fifteenth to the Twenty-first Century (World Social Change) I loved this book: it really helps put our present world into perspective: globalization has been going on for centuries. Our current wealth is due to freedom plus natural resources like coal and oil.

The subtitle says it all: ‘A global and Ecological narrative from the Fifteenth to the Twenty-first Century’
What you get for that is a new look at the global world. This book is, and that’s rather unique even today, not Europe-centric. It starts in the 15th century with China and India the most prominent regions in the world. Europe was rather backward. And it knew it, they don’t call them the ‘dark ages’ for nothing.

Be prepared for a total u-turn in your perspective on world economy and globalization. Globalization is NOT new: The old continents (Europe, Asia, Africa) have been connected economically for centuries. Sure, the America’s were isolated. In fact – their isolation contributed to the downfall of their civilizations a LOT: European disease killed off a vast percentage of the population. Not for nothing did workers (aka slaves) from Africa have to be imported.

The main thesis of the book is that the biological old regime – with subsistence based on agriculture and population growth limited by what the soil could produce – ended with the ability to produce through industry WITHOUT having to produce less food.

Let me say that again in different words: China developed all the technology it could have needed to start an industrial revolution. It lacked one thing: coal or an alternative. Why is that important: anything that can burn can work as a food for industry. We’ve used gass, oil and of course coal over the past centuries. When those resources are lacking what’s left to burn is things like trees. And those take up land. Land that could otherwise be used for agriculture. So industry and food compete for land when there is no other energy source available.

That lesson was learned again on a global scale in the last decade when it became clear that ‘renewable energy’ in the shape of biomass became big enough to threaten the food supply of the world’s poorest people.

At only 221 pages this is a small book. However, I highly recommend The Origins of the Modern World: A Global and Ecological Narrative from the Fifteenth to the Twenty-first Century to anyone who wants to know where we came from and some of the parameters of where we’re headed.