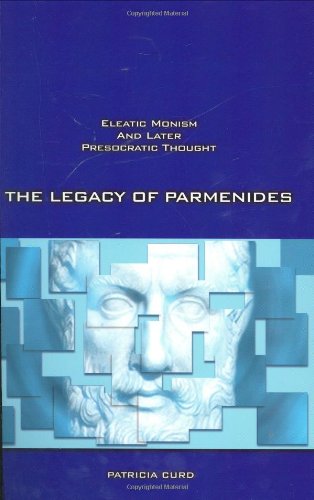 Parmenides was a Greek philosopher, considered by many scholars as the greatest member of the Eleatic School. He is said to have visited Athens at the age of sixty-five, and on that occasion the philosopher Socrates, then a young man, heard him speak.

The far-reaching and profound implications of Eleatic philosophy suggested but unexamined by Xenophanes are made explicit by Parmenides, who was not encumbered either by a theological bent or by a moral mission.

Parmenides expounded his philosophy in verse form, his only surviving work being large fragments of the didactic poem, On Nature, demonstrating the reality of Absolute Being, the nonexistence of which Parmenides declared to be inconceivable, inasmuch as it is disassociated from every limitation under which man thinks.

Parmenides held that the phenomena of nature are only apparent and due to man’s error; they seem to exist, but have no real existence. He also held that reality, True Being, is not known to the senses but is to be found only in reason.

This belief makes him a precursor of the idealism of Plato. Parmenides’ theory that Being can not arise from Nonbeing, and that Being neither arises nor passes away, was applied to matter by his successors Empedocles and Democritus, who made it the foundation of their materialistic explanations of the universe.
Tradition has it that he was brought to philosophy by the Pythagorean, Ameinias, that he erected a statue to Diochrates, another Pythagorean, and that he gave laws to Elea, which the natives of that city swore each year to uphold.

The name Eleatic is derived from the city of Elea, a Greek colony on the Italian peninsula, the home of its chief exponents, Parmenides and Zeno. It was a school of philosophy that flourished in the 6th and 5th centuries BC.

Eleatic thought is opposed to both the materialist philosophy of the Ionian school and the theory of universal flux propounded by the Greek philosopher Heraclitus.

Parmenides took a position opposite from that of Heraclitus on the relation between stability and change, maintaining that the universe, or the state of being, in an indivisible, unchanging, spherical entity and that all reference to change or diversity is self-contradictory. Nothing, he claimed, can be truly asserted except that “being is”.

Parmenides, saw that change or “becoming” involved the passage of a thing from “not-being” to “being”, eg for this water to become hot it must pass from being “not-hot” to being “hot”. Thus change seemed to him to involve the derivation of being from not-being. But this, he argued, is absurd, for something cannot come from nothing. Therefore change is self-contradictory and cannot take place; what is seen as apparent change is an illusion. It follows. also, that the world must be one, because it cannot separate out, or become many different things.

According to Parmenides, the appearance of movement and the existence of separate objects in the world are mere illusions, they only seem to exist. The beliefs of Pythagoras and Parmenides formed the basis of the idealism of later Greek philosophy.

Zeno of Elea, a disciple of Parmenides, tried to prove the unity of being by arguing that the belief in the reality of change, diversity, and motion leads to logical paradoxes. The paradoxes of Zeno became famous intellectual puzzles that philosophers and logicians of all subsequent ages have tried to solve. The concern of the Eleatics with the problem of logical consistency laid the basis for the development of the science of logic.
According to the Eleatics the universe is an essentially changeless unity which, being infinite in time and space, is beyond the cognition of the human sense. Only though philosophical reflection, they asserted, can ultimate truth be known. Sensory observations yield merely a limited and distorted view of reality.

More about these Pre-socratic philosophers: The Legacy of Parmenides: Eleatic Monism and Later Presocratic Thought